A+ A-
Print Email
Dark mode has been one of the most demanded features on Android for quite some time, as it looks super amazing and now, we’ve been seeing more Google dark mode apps in tons of apps and services. The most visited in the world for Android apps - google play, don't want to lack behind. 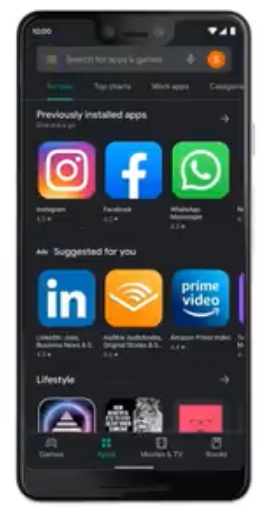 📢📢 #DarkTheme on Google Play is now available on any @Android device! Flip the switch from ⚪ ➡️ ⚫ in your Play Store settings. pic.twitter.com/fR0W1WT6jd
— Google Play (@GooglePlay) March 11, 2020

As you can see in the attached video, the new Google Play Store dark theme toggle completely transforms the color scheme of the home page, Settings page, and search page of the app. Just like the system-wide dark theme Android 10, the toggle also transforms the search results page, the detailed overview for an app listing, and even the ratings and review page for any given app. As mentioned in the tweet, the new dark theme toggle in Google Play is already available all Android users now.

In case you haven’t received it yet, you should receive an update with the toggle in the next couple of days.
Posted by Shelaf
Labels: Android
at 5:13 PM