Menu
Home » Browsing Tips » Now You Can Switch Back to MTN Network, All Issues With Their Internet Services Has Been Resolved

Now You Can Switch Back to MTN Network, All Issues With Their Internet Services Has Been Resolved

A+ A-
Print Email
I'm sure that most of the MTN subscribers have switched to other networks that have a strong internet connection, due to the MTN slow data speeds and difficulty with accessing the internet these days.

For the past few days, Most of the MTN subscribers have been lamenting of slow data speed even though the network displays a stable 4G connection in most locations. The network opens some sites, and some won’t even load and this has kept subscribers frustrated.

MTN Nigeria thus, sent a message across to all subscribers stating that “We apologize for slow data speeds and difficulty with accessing the internet. Please bear with us as we work to resolve the issue” without stating the real cause of the slow data speed.

Further digging reveals that a technical fault with two submarine cables has caused the Internet to slow across a number of African nations as a result of damages.

The outages first occurred on Thursday (January 16). The cables involved are the South Atlantic 3/West Africa (SAT-3) and the West Africa Cable System (WACS), both of which run from Africa to Europe.

A total of 13 countries , with local news outlets describing cases of slow Internet speeds and outages. Some of the nations affected include South Africa, Ghana, the Ivory Coast, Nigeria, Gabon, and Cameroon.

South African multinational mobile telecommunications company, MTN Group Limited has taken to their MTN Nigeria Twitter handle to say sorry and as well, hint us that the issue has been resolved. 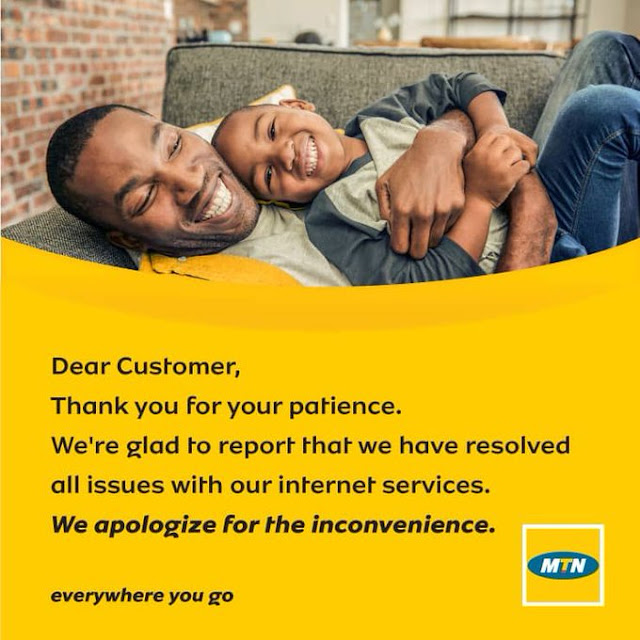 The post by @MTNNG said: "Dear customer, Thank you for your . We're glad to report that we have resolved all issues with our internet service. We apologize for the inconvenience."

Therefore, those who have abandoned their MTN Sim card due to the internet slow connection, but still have an active subscription on it. You can now switch back to your MTN network, so as for your data not to waste. MTN said that the issue has been fixed.

Please try it and let us know if the MTN internet issue has really fixed in your area.
Posted by Shelaf
Labels: Browsing Tips
at 11:05 PM