A+ A-
Print Email
In pursuit of the tech giants Google and Apple, Facebook has announced its own payment platform, know has Facebook Pay. It is a single payment system that ties into all of the things under the Facebook umbrella — Messenger, Instagram, WhatsApp, and Facebook. 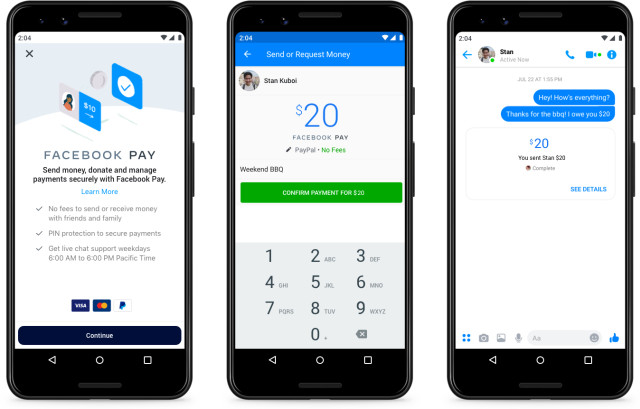 According to a blog post about the product, Facebook Pay will offer users a way to send money for things like in-app purchases, user-to-user payments, fundraiser donations, and other purchases across Facebook and Messenger, and later Instagram and WhatsApp. PayPal, as well as most major credit and debit cards, are supported by the product, and Facebook says that payments can be processed through partner services like PayPal and Stripe. Users will be able to set it up from the Settings menu for individual apps either app-by-app or across platforms.

In a parallel blog on Facebook Pay, the social media giant has clarified that their new payment service is separate from their -based Calibra wallet, which will run on Libra network.

Uses of Facebook Pay
Facebook and Instagram both allow users to buy and sell products on their platforms. While Facebook has its own Marketplace, Instagram’s shopping feature has a huge customer base. Facebook Pay will enable users to pay for fundraisers, donations, in-game purchases, event tickets, to pay friends on Messenger, and purchases from “select Pages and businesses” on Facebook Marketplaces, the blog says.

How to Get
You can start using Facebook Pay Facebook or Messenger with just a few taps:
Facebook Pay is compatible with most debit cards and credit cards along with other payment platforms such as PayPal and Stripe. Users will have the option to add a PIN or use their device’ biometrics for authentication or an extra layer of security while making payments.

The blog confesses that Facebook will be collecting information such as transaction date, billing, shipping and contact details, the platform will use this information to show you more “relevant content and ads”. For example, if you purchased tickets for an event on Facebook Marketplace through Facebook Pay, you will start seeing ads of event tickets and related accessories.

Facebook Pay is rolling out to a small set of countries and apps first, with the intention to bring this service to more people over time. Now available in the US.