Menu
Home » Android » NOKIA 8.2 is Coming with 5G and a Pop-out Selfie Camera

NOKIA 8.2 is Coming with 5G and a Pop-out Selfie Camera

A+ A-
Print Email
Since 5G becomes more influential in the technological field, smartphone producers are rushing to implement it into their devices. Already Huawei and Samsung are selling phones with 5G capabilities and soon there are going to be more companies joining and if the stories are genuine Nokia is going to be one of them.

We’ve already heard rumors that the company was working on a 5G device, and now we’re getting more confirmation from NokiaPowerUser and their inside sources on the forthcoming Nokia 8.2 5G. 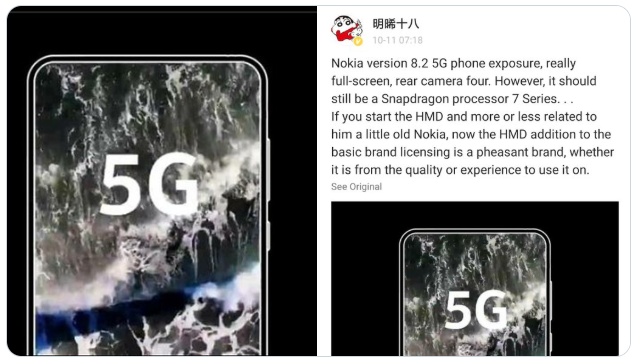 A Nokiapoweruser report has stated that at MWC 2020 next year we could expect HMD Global to launch the Nokia 8.2 smartphone, which will come with 5G, making it the first Nokia phone to have this technology. Apart from that the report also mentions that the phone will have quad-camera setup and also a pop-up camera on the front to provide for a high screen-to-body ratio.
However, the report specifies that the Nokia 8.2 will not be coming with flagship specs which leads to the possibility that the 5G Nokia 8.2 might be announced separately with flagship specs. The report also states that the Nokia flagship phone will be costing somewhere around $500 as stated by HMD Global CEO Juho Sarvikas.

Just stay glued, we will keep you updated about the 5G Nokia value flagship leaks, rumors, and launch details.