A+ A-
Print Email
Airtel NG has taken an ultimate step to extend broadband connectivity in homes and offices across the country as it releases its Home Broadband value offering pan Nigeria.

The telco says the launch of its exciting Home Broadband offerings rides on its expansive and modernized 4G network, which has been deployed in over 130 cities and towns across Nigeria, making Airtel the first operator to launch the Home Broadband plans in all 36 states including the Federal Capital Territory. 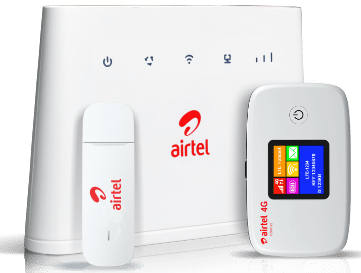 The Airtel Home Broadband (HBB) package is available in Routers and MiFis and comes in various affordable recharge plans, offering up to 100GB of data bonus.

Under the new Airtel Home Broadband plans, when a customer purchases an Airtel Router for N25,000, he or she is instantly credited with 100GB data and also offered complimentary 10GB data for 6 months on purchase of the Airtel N10,000 data bundle plan.

The Airtel MIFI comes at N15,000 and offers instant 40GB data and an additional 5GB monthly for 6 months on purchase of the N5,000 Data Bundle plan.

The Routers and MIFIs are bundled with a 4G SIM and customers can buy a bundle plan, register their data line and check their data balance by dialling *370# or by visiting the website, www.onetouch.ng.

Visit any Airtel Store to buy any of the MiFi devices.