A+ A-
Print Email
As part of its market research efforts, Facebook has announced a new Study from Facebook, it is an app that will compensate its members in exchange for information about their apps' usage. Naturally, Facebook wants to make it clear about what data it will collect and analyze from users, and that it won't be selling it to third parties or use it to target ads.

After being exposed earlier this year engaging in some questionable market research activities and having to shut things down, Facebook is its paid market research program, but this time with principles — namely transparency, fair compensation, and safety. The goal? To find out which other competing apps and features Facebook should buy, copy or ignore. In the case of the new program, it is limited to Android devices. 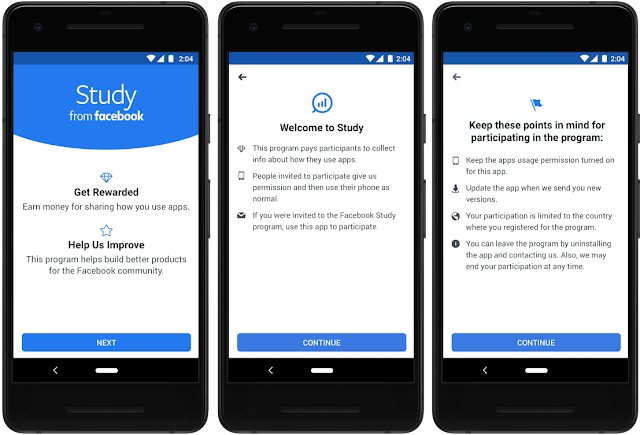 Facebook indicated in their announcement of Study from Facebook that they are moving to a new model for market research in which all participants are compensated or as they call it, “reward-based market research.” Facebook did not indicate what the level of compensation would be for participants.

In order to get into the program, 18+ Facebook users and non-users in the U.S. India will have to keep an eye out for ads that Facebook will be running, inviting people to participate in the program. If someone is interested, they merely have to click on the ad to get more information on how it works and to go through a registration and qualification process. If accepted, they will be directed to download the Study from Facebook app from the Google Play Store.

Once installed, Facebook says the research program will collect the following information from a user’s device:


Before it was shut down, during the registration process, you’ll be asked to provide how you want to receive your reward via PayPal, but no info about how you’ll be rewarded now that’s it’s been reopened.

Facebook says they will not collect any user IDs or related passwords. Nor will the collected personal content a user may have on their device like photos, videos or messages. Facebook promises they will not sell any of the information collected to third parties nor will they use it to target ads at users of the app.