A+ A-
Print Email
Browsing is an important piece of our everyday life and knowing fully well that internet plans are quite expensive, a lot have opted to browse smartly by activating the Airtel night bundle that allows you to browse during the late hours of the day!

Airtel Night users were shocked last night noticing the unannounced reduction in the Night bundle even though it still displays N25 for 500MB on SmartTrybe Menu. It was a moment of disappointment for subscribers most especially those who had a line up of downloads to make. 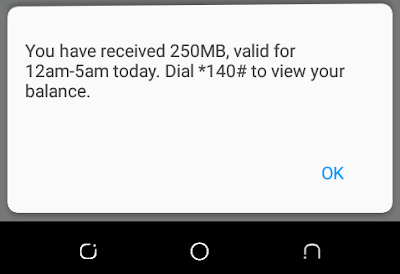 … when you are expecting to see 500MB, and you receive that shocking message that you’ve been given 250MB…

Anyway, this is not the first time Airtel NG will discontinue or decrease the volume of existing data plans and I’m guessing it won’t be the last, but that should not stop us from having hope for the cheapest and the best internet data in the upcoming months.