A+ A-
Print Email
Mozilla has announced Firefox 63 with Enhanced Tracking Protection, a feature that blocks third-party trackers to increase your privacy and stop your activity across the Web from being tracked.

The new Firefox 63 gives users the option to block third-party tracking cookies or block all trackers. Users can also create exceptions for sites they trust, in case they break due to having trackers blocked. In a detailed blog post, the company discussing this feature, explains finding the right trade-offs between having stronger privacy protections and inadvertently hurting small websites that use third-party tools.

Another privacy-related feature may be a little more contentious. Starting from today, a random selection of US Firefox users will be offered a subscription to ProtonVPN. VPNs provide protection and privacy from network eavesdroppers and have become particularly popular by users of public Wi-Fi hotspots in cafes, airports, hotels, and so on. 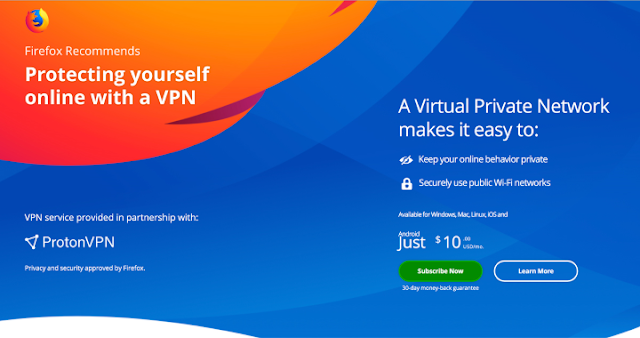 The selected users will be able to download and install the VPN software after signing up for a paid subscription, which will have support for Windows, macOS, Linux, iOS, and Android.

Mozilla said the VPN can be easily turned on and off, and the subscription can be canceled at any time.

However, Mozilla decided to partner with ProtonVPN to deliver the services:

As a company [ProtonVPN] has a track record of fighting for online privacy and they share our dedication to Internet safety and security,”

ProtonVPN offers a secure, reliable, and easy-to-use VPN service and is operated by the makers of ProtonMail, a respected, privacy-oriented email service.

Mozilla is currently heavily dependent on money from Google; Google pays a large sum of money to have its search engine as the Firefox default. This is an unusual relationship, given that Firefox directly competes with Google's Chrome. Mozilla is hoping that this VPN promotion will enable it to broaden its revenue sources, making it less dependent on Google's cash.
Posted by Shelaf
Labels: Security Tips
at 11:50 AM