A+ A-
Print Email
Great news for StarTimes subscribers as the pay-Tv Company acquired broadcasting rights for this year's UEFA Europa League. You can now enjoy watching the 2018/2019 season Live and in HD on your StarTimes Sports Channels and also on StarTimes App. 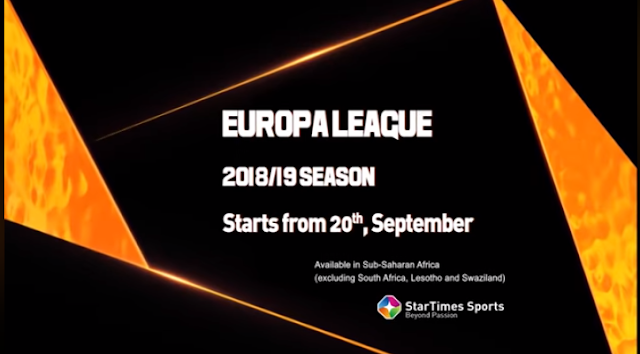 StarTimes has announced its acquisition of 2018/2019 UEFA Europa League broadcast rights through their official Twitter handle.

Good News:
We have secured the right for UEFA @EuropaLeague 2018/2019 season.

Get ready for the action, live and in HD on StarTimes Sports.

Recommended: StarTimes Price Reduction Takes Effect, See How to Get The Classic Bouquet at Reduced Price of N1,900

The broadcast, which is expected to commence on September 20, 2018, would see Nigerian, Kenyan, Ghanaian football fans and other Sub-Saharan Africa experiencing the best from Europe's club competition.

The final will be played at the Olympic Stadium in Baku, Azerbaijan. The winners of the 2018–19 UEFA Europa League will earn the right to play against the winners of the 2018–19 UEFA Champions League in the 2019 UEFA Super Cup. They will also automatically qualify for the 2019–20 UEFA Champions League group stage, and if they have already qualified through their league performance, the berth reserved will be given to the third-placed team of the 2018–19 Ligue 1, the 5th-ranked association according to next season's access list.

As the title holders of Europa League, Atlético Madrid qualified for the 2018–19 UEFA Champions League, although they had already qualified before the final through their league performance. They will only be able to defend their title if they finish third in their group in the Champions League group stage.

Read Also: How to Link Your Decoder Smart Card with the StarTimes App

Enjoy all the action in the UEFA Europa League 2018–19 live and in HD on StarTimes Sports Channels and also on StarTimes App.
Posted by Shelaf
Labels: Satellite TV
at 2:12 PM