Samsung Unveils its First Ever Triple-lens Camera Smartphone – Galaxy A7

A+ A-
Print Email
The Korean electronics giant has unveiled its just done smartphone, it is known as Galaxy A7, a midrange smartphone with a rear triple camera that features a trio of settings. 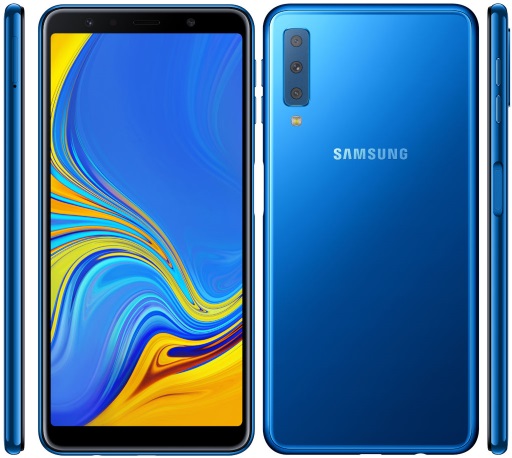 Samsung Galaxy A7 boasts a triple-lens setup that features a 24MP primary camera with a F/1.7 aperture, an 8-megapixel shooter with a 120-degree ultra-wide field of view, and a 5MP “depth” module used for bokeh effects. There’s also a 24MP front-facing cam with an LED flash and "Selfie Focus" effect for adding bokeh. But being a mid-range device, there’s a noticeable absence of a telephoto lens.

One high-end feature the A7 does have is Intelligent Scene Optimizer, which debuted on the Galaxy S9. This automatically recognizes what you’re pointing the camera at and adjusts the camera settings to produce the best image quality. 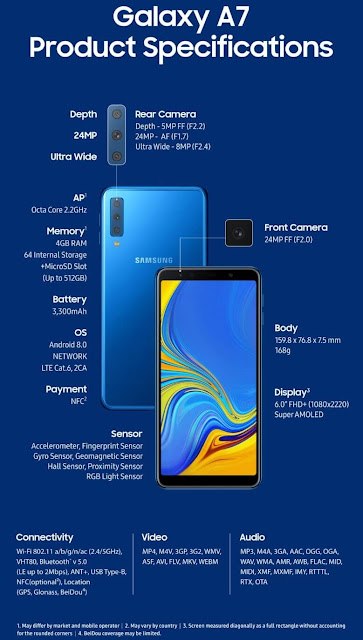 Aside of Cameras, Galaxy A7 features a 6-inch Super AMOLED display with 1080 x 2220 pixel resolution and no notch. The phone uses an octa-core 2.2 GHz CPU paired on an unnamed chipset and comes in three different memory configurations – 4GB/64GB, 4GB/128GB or 6GB/128GB.
NFC for Samsung Pay, and a 3300mAh battery. There’s even a fingerprint sensor on the side, Dolby Atmos support, and Bixby—though there’s no dedicated button for the AI, which some may see as a plus point. All in all, some pretty impressive specs for a mid-range handset.

Key Features of Galaxy A7
Samsung Galaxy A7 will be available in blue, black, gold and pink in select European and Asian markets from this fall. It will reach other locations at a later date. No word yet on price, but we’ll learn more about the phone, and Samsung’s first quad-camera device, at the Galaxy Event on October 11.
Posted by Shelaf
Labels: Android, Samsung
at 3:29 PM