A+ A-
Print Email
Airtel Nigeria is working tirelessly in spreading their 4G LTE Service across all 36 states of Nigeria. Prior to this new 4G launch in Delta, Airtel had announced the deployment of 4G in other states, including Abuja, Ibadan, Lagos, Rivers, Anambra, and Nassara states. Now, we have strong beliefs in Airtel Nigeria, more cities will be added soon, as promised. 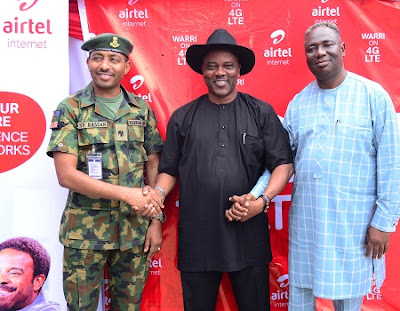 Yesterday, on the 25th of September, Airtel Nigeria has announced the launch of its 4G – LTE (Fourth Generation – Long Term Evolution) service in Delta State, covering major cities and towns including Warri, Effurun, Asaba, Kwale, Ughelli, Sapele, Okpanam, and Agbor, amongst others.

Residents and onlookers who witnessed the launch at the Airtel Showroom located at 74 Warri/Sapele Road, Effurun by Water Resources, were full of excitement as they commended the telco for deploying 4G services in Delta State.


Akpodubakaye Arthur (JP), Vice Chairman, Warri South-West Local Government, said the switch to 4G will help speed-up economic and commercial activities as well as boost productivity of professionals, students and even traders across the state.

“We commend Airtel for its 4G drive and for connecting Warri and major cities and towns in Delta to its 4G network. This is not just a step in the right direction but a development that will transform many lives,” he said.

Also speaking at the event, the Regional Operations Director of Airtel Nigeria, Oladapo Dosunmu, said Airtel believes that delivering a superior 4G experience is a major step in actualizing its objective of making life simple and better for Nigerians.

Just like what Airtel did for their subscribers in other states with their 4G Service, we hope that 4G new users in Delta can also get Free 4GB data when swapping their SIM to Airtel 4G. 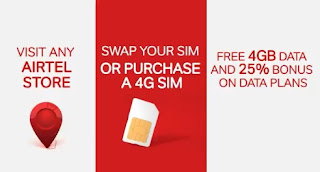 Are you living in Delta state and do you have a 4G enabled device?
To check if your phone is 4G enabled; simply dial *121# and select 4G services.

Do you want to enjoy reliable and super-fast internet on your phone? Then come on board AIRTEL 4G.

You’ll require a SIM swap in order to be able to access Airtel 4G LTE services.
Kindly visit an Airtel shop near you with a valid means of identification for assistance on your swap request.
Once you are done, check your data balance by dialing *140# and you will be given a free 4GB data bonus.

Both new and existing customers were advised to visit any Airtel showroom to switch to the 4G service.
Posted by Shelaf
Labels: Browsing Tips
at 12:26 PM