A+ A-
Print Email
Samsung has launched its highly-anticipated Galaxy Note 9, the latest phone in its premium range, as well as a new Galaxy Home smart speaker to challenge the likes of Apple's Home Pod and Amazon's Echo. 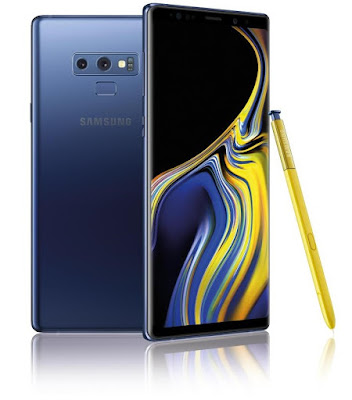 The Galaxy Note 9 has the best specs you’ll find in any flagship Android phone, the screen is bigger, its S Pen has more tricks than ever before, and the battery is huge. Oh, and Samsung’s DeX software is now built right into the phone — no dock required — so you can plug it into any external display for a desktop-like experience.

Galaxy Note 9 will be sold in two configurations: there’s a 128GB / 6GB RAM and a top-tier 512GB / 8GB RAM version. Preorders begin today August 10th, and the phone will be available on August 24th at all major carriers or direct (and unlocked) from Samsung.

Note 9 comes with a 6.4-inch Quad HD+  Super AMOLED Display – an end-to-end, bezel-less screen that extends to the phone’s sides, similar to the Note8.

It has 12-megapixel rear camera with variable aperture tech that uses f/1.5 aperture for night shots for a brighter picture and f/2.4 aperture for normal shots in the daytime as well as a secondary 12MP Telephoto lens for live focus for bokeh effect with background blur, similar to the S9+.

It has Iris scanner, fingerprint sensor present below the camera, like the S9 series. It’s also water resistant up to 1.5 meters of water for 30 minutes with IP68 ratings. It comes with Bixby assistant that was first introduced with the S8 series and also has a dedicated Bixby hardware button.

S Pen and Camera
Samsung produced a new S Pen for the Note 9, too, which features Bluetooth low-energy connectivity.

This lets owners use the pen as a remote control for the device, controlling actions such as taking photos, going through slideshows, playing and pausing videos, and more.

Samsung has finally increased the battery capacity to 4000mAh, which is the largest on its flagship device till date. This supports both wired Adaptive fast charging as well as wireless fast charging.


The Galaxy Note 9 will be available from 24 August 2018 in four colors – Midnight Black, Lavender Purple, Metallic Copper – with matching S Pen – and Ocean Blue with a yellow S Pen.