Jumia 6th Year Anniversary Sales - Over 1 Million Deals, Up To 70% Off Your Favorite Brands

A+ A-
Print Email
The most anticipated time of the year is here again, Jumia Anniversary 2018. Jumia is 6 years old! Jumia Anniversary 2018 is being celebrated to thank esteemed customers. Jumia always strives for the best ways to serve you better and also provide you with excellent customer experience. 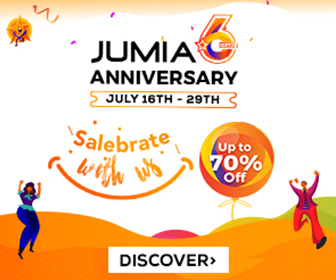 The anniversary starts on July 16th and ends on the 29th July 2018, that is 5 days to go for exciting product offerings and discount.

What You Get from The Jumia Anniversary

This year’s anniversary is going to be the biggest ever you have experienced so far. Right from the first day, you get to enjoy massive and exciting discounts. Don't miss out on this opportunity.

Jumia, formerly known as Africa Internet Group (AIG), is a system of online commerces, marketplaces and classifieds websites and applications created in 2012. Started in Lagos, the company has a presence across 23 African countries.

The first company to launch, Jumia, is an online shopping website for electronics and fashion as a direct competitor to Kilimall and Konga. It launched in Lagos, in June 2012 and was followed by Jumia Market (formerly Kaymu), a community based online marketplaces in September of that same year. Jumia Travel (formerly Jovago), an online hotel booking platform was launched in Nigeria in June 2013, just before Jumia House (formerly Lamudi), Jumia Car (formerly Carmudi) and Jumia Food (formerly Hellofood). The last two services, Jumia Jobs and Jumia Deals were launched in April 2015.

As of 2016, Jumia had 126 operations across 23 African countries, thus covering 90% of African GDP and 3 million customers. In 2016, Jumia became the continent’s first unicorn being valued over 1 billion USD.

Don't miss out on this opportunity. To participate, simply CLICK HERE

Jumia Anniversary 2018 starts on July 16th and ends on the 29th July 2018. I will continue hunting down all the best Anniversary Deals, sharing them with you right here, so stay glued.
Posted by Shelaf
Labels: Jumia
at 12:30 PM