A+ A-
Print Email
Hope you guys still remember the Infinix Smart? a smartphone from Infinix Mobility which was launched silently in Nigeria last year. Well, the OEM company has just resurrected the series by introducing the Smart 2.

Infinity Mobility has officially announced the released of the Infinix Smart 2 and Smart Pro 2 today, in Nigeria, Pakistan and will be available in other countries as well.

The device is loaded with the trending Face ID feature, fingerprint scanner, and dual 4G LTE. The device is perfect for Infinix fans on a budget who can’t afford the Hot 6 and Hot 6 Pro. Without further ado, let's meet the Infinix Smart 2. Both the Smart 2 and Smart 2 Pro redefine viewing experiences on smartphones as they consist of a 5.5 HD+ screen display with the 18:9 screen aspect ratio which guarantees the user to view more. 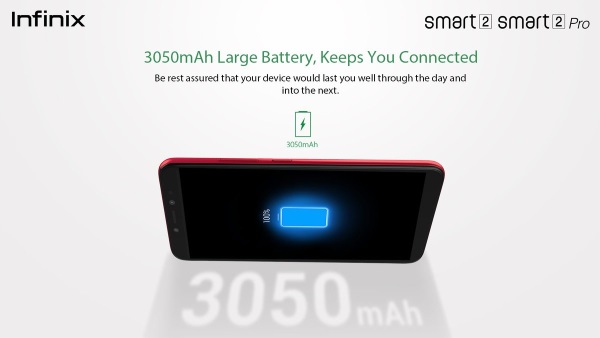 Both also come with a long-lasting 3050mAh battery and 8MP lowlight selfie camera that does the job of taking amazing pictures even in low light situations while the Smart 2 Pro possesses dual rear cameras (13MP+2MP) with camera modes such as Bokeh effect and Portrait mode for premium quality pictures.

The Smart 2 and Smart 2 pro come with fingerprint scanner and Face ID for improved security of vital files plus it runs on the Android 8.1 Oreo OS. However, the Smart 2 operating system is tailored in a lighter version of the Oreo OS to offer a smoother and faster smartphone experience for users by offering newly reimagined apps such as Google Go, YouTube Go and Google Assistant for Android (Go edition) whilst managing data usage and enhancing efficiency.

Difference Between Infinix Smart 2 and Smart 2 Pro
When comparing the two new phones, you will notice that both smartphones look alike in terms of appearance, design and even features but Infinix Smart 2 Pro had an edge in the area of memory. For instance, Infinix Smart 2 uses 1GB RAM while Smart 2 Pro uses 2GB RAM but both devices use same 16GB inbuilt memory.

Another difference is that Infinix Smart 2 Pro uses 4G LTE (Dual SIM Support) and dual back cameras consisting of 13MP + 2MP snappers while the Smart 2 has just 13MP snapper at the back. Also, the prices are slightly different as expected. Apart from that, I think there are no other noticeable differences between the two phones. 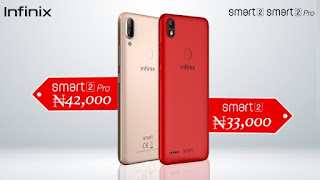 NB: These prices may change with time and places of purchase. The Smartphones will be commercially available in the market or online stores like Jumia, Slot, and Konga.

What do you think about these phones?
Posted by Shelaf
Labels: Infinix
at 9:14 PM