A+ A-
Print Email
Smartphones have become an integral part our life, but sometimes using them too much may be unhealthy for you socially and physically.

At Google's annual developer conference I/O 2018, a major feature announced for Android 9 dealt with tackling the problem of excessive smartphone usage. Google has called this collection of features in Android P as 'Digital Wellbeing'.

The feature 'Digital Wellbeing' will help you curb your smartphone addition as it will track the time you spent on your phone with a breakdown of each app. It will also notify you of how many times you’ve unlocked your phone.

Good news, YouTube – a video sharing platform, has also joined the moving train by introducing a new feature. YouTube can now caution you to stop watching videos if you on it for too long. 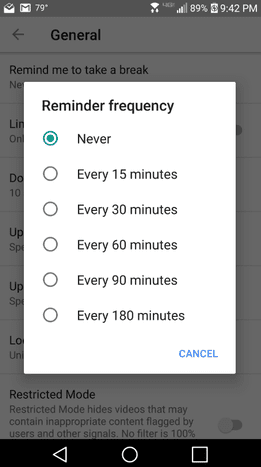 Note that it doesn’t require Android P to work, it is just an update on its duty. It’s a simple reminder that can be customized, telling you to take a break from watching videos on the platform.

How to Turn on YouTube's Reminder to Caution You on Spending Much Time Watching Videos
From there, you will see several different reminder frequencies:
After the “timer” has run out, a pop-up message will appear suggesting it’s time to take a break. Additionally, you can use this pop-up to either dismiss the message or go back to settings to adjust the frequency.

This update is gradually rolling out so don’t panic if you don’t have the update yet on your back end.
Posted by Shelaf
Labels: Others
at 10:32 PM