A+ A-
Print Email
Firstly, you wonder what Tecno means by the name Pouvoir. Well, Pouvoir is a French word that means Power. Tecno Mobile has formed a new product line of battery-focused smartphones and branded it Pouvoir. It appears Tecno has created this section to challenge Infinix’s Note series.

As such, the TECNO Pouvoir 2 comes with a big 5000mAh Battery Capacity that can give a relentless 4 days battery life or 96 Hours Power On for average users, as well as a 6-inch display and a 4G network. 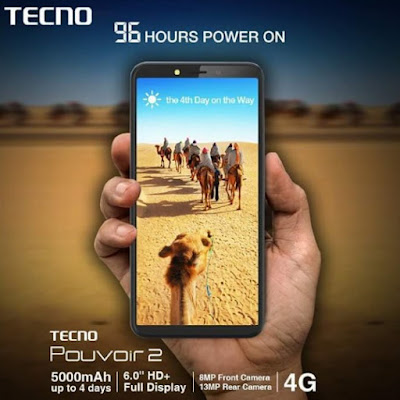 Can you see the similarities to the average Infinix Note smartphone? The new smartphone maker -Leagoo, recently announced a model as the Infinix Note 4 killer. It looks like Tecno is in on the action too.

From all available information, the Pouvoir 2 is simply the successor of the Tecno L9 Plus.

Below are the full TECNO Pouvoir 2 specs, features, availability and price.

DISPLAY AND DESIGN
Tecno Pouvoir 2 comes powerfully with a great IPS LCD capacitive touchscreen with 16 million colors and 6.0 Inches HD+ with resolution of 720 × 1440 pixels and a tiny bezel. It supports multi-touch. 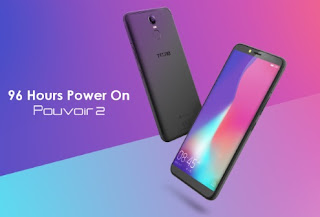 About the design, the Tecno Pouvoir 2 has a plastic covering and the design is similar to that of other Tecno phones, especially the Camon series. It measures 159.8×76.8×8.5 mm in dimension.

CAMERA
Tecno Pouvoir 2 camera has been improved greatly as it has 13MP back or rear camera with Dual flash and 8MP frontal camera with flash. It also supports Portrait Bokeh.

OS AND MEMORY STORAGE
Tecno Pouvoir 2 runs on Android 8.1 Oreo operating system to provide a clean and smooth user interface and experience. It comes with 2GB RAM, 16GB inbuilt memory storage that can be expanded up to 128GB using a microSD.

PROCESSOR and BATTERY
Tecno Pouvoir 2 comes with Quad-core MediaTek processor that clocks 1.3GHz. In the battery, compartment, it houses Non-removable 5000mAh battery capacity that is said to offer 96 hours power on. 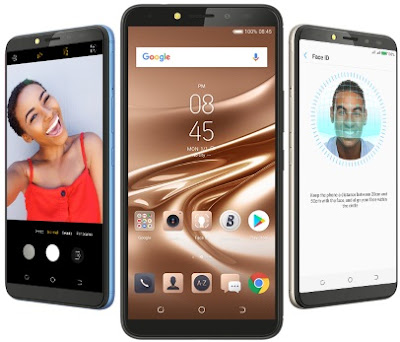 Specifications and Price of Tecno Pouvoir 2 Smartphone
Price and Availability
Tecno Pouvoir 2 smartphone can be gotten from any offline and online shops in Nigeria and other countries. It’s available on Jumia and others, at the price of N46,000 only.
Posted by Shelaf
Labels: Tecno
at 12:06 PM