A+ A-
Print Email
Instagram users now have a new way to solicit opinions from their friends and followers.

Instagram has announced a new feature, it’s known as “emoji slider,” a new audience feedback sticker that polls your viewers on a rating scale using any emoji. 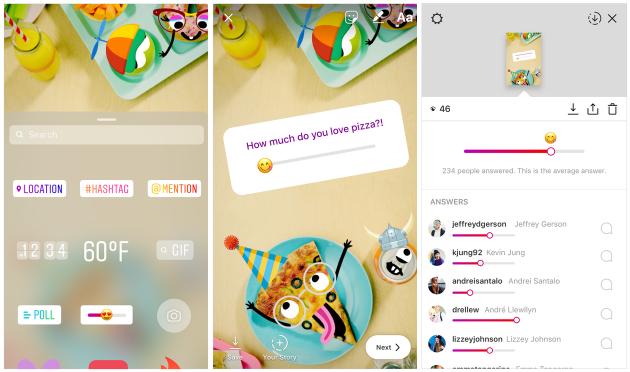 The emoji slider acts like those numerical sliders that let you rank a topic on a scale of 0 to 10. Instead of numbers, however, you select an emoji and can move the slider from a very low level of that emoji to a high level. The function makes the most sense in conjunction with a smiley or a heart: You could ask a question such as “How much do you love tacos?” and then include a slider with the heart emoji or heart eyes smiley.

But you can use this with a wide variety of pre-selected emoji, so the options—and creativity—are pretty much endless.

How to add the emoji slider to your own Instagram Stories
To add an emoji slider sticker to your story, select it from the sticker tray after taking a photo or video. Place it anywhere you’d like and write out your question. Then, set the emoji that best matches your question’s mood. You can pick from a few of the most popular emoji, or choose almost any emoji from your library if you have something specific in mind.

Friends and followers will be able to respond to your slider as soon as you’ve shared it.

When you see an emoji slider in a story, just drag the emoji to the left or right and watch it animate as you make your decision. Release the emoji to set your response, and you’ll see the current average of how others have responded so far.

The update is already rolling out on version 44 for both iOS and Android app. If you don’t have instagram on your phone, do well to download from iTunes Store | Google Play Store.
Posted by Shelaf
Labels: Social Media
at 8:59 PM