A+ A-
Print Email
A few weeks back, Infinix pushed the official Android 8.1 Oreo OTA Update to Infinix Note 4 devices, but it is unfortunate that the last update was filled with bugs that pushing had to be paused and most of those who had upgraded had to downgrade. 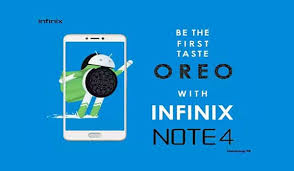 As I said earlier in my previous post that it's certain Infinix will surely push another update to fix the issues. Thank God, Infinix has announced that they have resumed pushing Android 8 Oreo OTA updates to the Infinix X572 Note 4. According to the announcement, this update includes some bug fixes.

Features of The New Oreo Update
Feature and App update
Optimized System Performance
Issues fixed
The screen recorder is not included in this update.

Before You Upgrade,
Once the above requirements are met, go ahead with the below procedures.
Relax and wait for the new update to fully install. After successful installation, your phone will be rebooted and Android 8 Oreo will smile to you on the device! Take note that the first booting process might take a few minutes to complete.
Posted by Shelaf
Labels: Infinix
at 4:40 PM