A+ A-
Print Email
Mobile World Congress is the biggest mobile event of the year, seeing the launch of many of the top smartphones, smartwatches and tablets, as well as seeing the emergence of the hottest new trends in mobile. 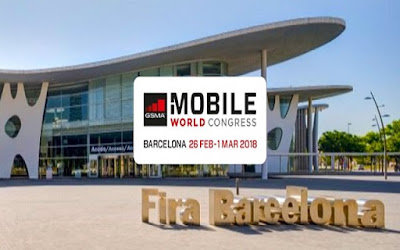 This year, MWC runs from February 26th to March 1. As of 2011, Barcelona, Spain has been home to the event, which will garner around 100,000 attendees. MWC18 will once again take place at Fira Gran Via with selected events, including 4YFN, taking place at Fira Montjuïc. Rumors indicate some big phone announcements will take place this year. One of the biggest ones we are expecting is also one of the most popular smartphones in the world — the newest Samsung Galaxy flagship.


Samsung: Unveiling the Galaxy S9 & S9+
With the exception of last year's Galaxy S8, Samsung has normally used MWC to announce the latest iteration in the Galaxy S series. Last year deferment of this plan was due to the Note 7 fiasco, but with that blunder out the way, all rumors indicate a return to normal procedure.
One of the strongest pieces of evidence is a media invite and poster sent out by Samsung for an Galaxy Unpacked event on Sunday before MWC (February 25 at 12 pm EST).
Samsung's S9 tease is all about redefining the camera, so it's here we expect to see the real innovation. Rumours suggest that the new S9 will carry a similar design to the S8, but with the camera offering dual aperture.

Huawei P20
Last Year, Huawei took full advantage of MWC to announce the P10. Huawei follows a similar product segmentation to Samsung, with the P series being the more approachable flagship and analogous to the Galaxy S series, while the Mate series is for the power user like the Galaxy Note series. Our sources suggest that the flagship Huawei might introduce at the MWC 2018 will be called the P20.

Nokia: 1, 7+ & 9 a Possibility
We are very happy to see Nokia come back and make its name among the android world, yet taking another step to rule the mobile world once again. MWC 2018 might be where we see the first real Nokia flagship since HMD Global took over the brand. As good as the Nokia 8 was, it struggled to stand out from the competition, because the fans were not much impressive. Nokia 8 did not contain flagship specifications, its older design and small display failed to appeal to many fans. Hence this year our expectations are again pretty high, and we are expecting something much better, and it also seems like Nokia is promising something, close competition to the Samsung Galaxy S8 and the iPhone X. The Nokia 9 rumor mill quieted down after that, but recently, HMD sent out press invites for an event on February 25 at 10 am EST — right before MWC. There's a good chance that Nokia could be announcing the heavily leaked Nokia 7+ and Nokia 1, but we're keeping our fingers crossed for the Nokia 9 flagship.

BlackBerry: KeyOne & PRIV Sequels a Possibility
Since TCL took over as its official hardware maker, BlackBerry has been on a roll, releasing several well-received smartphones. At CES, we learned BlackBerry will be releasing at least two new smartphones this year, and rumors indicate that they might be announced at MWC.
Rumor has it that one of these devices will be a sequel to the KeyOne. While we're not sure of the name, fans have been calling it the KeyTwo, which would make logical sense, although rumors indicate the code name is Athena.
BlackBerry may be reviving the PRIV with a sequel titled Uni. TCL has registered this trademark with USPTO only days before MWC 2018. Last Year, TCL did the same with "KeyOne" right before its announcement, which lends some credence to this rumor.

Motorola: New G6 Variants a Possibility
The latest rumors suggest that Motorola is planning to announce a series of successors to last year's Moto G5 lineup. The phones we're hoping to see are the Moto G6, Moto G6 Play, and most importantly to US readers, the Moto G6 Plus.
While Motorola does not have an event scheduled at MWC, other phone makers are using the media attention around the conference to generate publicity. With the timing of the leaks on the G6 front, it's definitely plausible that Motorola could hold a separate event around MWC to announce these phones.

LG: New V30 Variant Called 'Alpha'
According to rumors, LG has had a rough start to 2018. Its flagship lineup, the G series, apparently has been delayed to later in the year because LG doesn't agree with its current design. The previous reports indicate they might abandon the G series naming altogether as they were looking to rebrand in the hopes of stopping a multi-year decline in sales.
At first, the G7 was rumored to be announced at MWC, but now it looks like LG will instead announce another phone — a new variant of the LG V30.


Also Check: Best Smartphones to Look Forward to In This 2018

With Mobile World Congress, we should get our first introduction to the direction of smartphones in 2018. With the Galaxy S9 leading the charge, we'll have a good indication of the design choices and specs for phone releases later in the year.

Which phones are you looking forward to? Let us know in the comments below.
Posted by Shelaf
Labels: mobile
at 2:26 PM