Jumia Black Friday 2017 Festival, Up to 80% Off - Check Out The Deals Calender

A+ A-
Print Email
We are already in the mood of Black Friday and Jumia Nigeria has brought out their calendar for this year’s Black Friday massive discounted sale offer. This year’s Jumia Black Friday is something you wouldn’t want to miss because there are lots up for grab, such as a brand new car, Ford Figo.

I have already made a post on that, Jumia is giving away a brand new car to one lucky customer, free flight tickets to Europe and much more giveaways during this year’s Black Friday.

This year, Jumia has planned their own Black Friday promo to go beyond the Black Friday (which for this year, it is November 24). The 2017 Jumia Black Friday festival will start on 13th of November and will go all the way to 13th of December. That’s exactly 31 days! And it is going to be a 31 days of online shopping fun.

The discount, which is as high as 80 percent, is the accumulation of discounts on various items selected for discounts by the brand owners. To ensure that Jumia brings its customers the best deals and widest assortment, the e-commerce giant has partnered with top brands including Infinix, Fero, HP, Intel, Phillips, Pampers, MTN, Coscharis and Air France-KLM.

Aside the huge discount, Jumia is also targeting 50 million customers’ visit to its site and about two million deliveries on purchasing items, during the period.

The Chief Executive of Jumia Nigeria, Mrs. Juliet Anammah, who made the disclosure at a press conference in Lagos to announce its biggest Black Friday sales event ever in 2017, said it was the first time in the fifth year of Jumia operations in Nigeria, to stretch its business target to as much as 50 million visits to its website, with estimated two million delivery of purchased items that will be largely discounted. She assured Nigerians that Jumia has put in place a robust network that would carry the traffic surge during the period, with promises to make this year’s Black Friday a memorable one for customers. 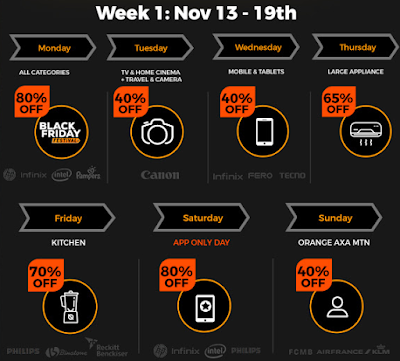 Those are the Jumia 2017 Black Friday first week deals. It seems Jumia want to be releasing the deals calendar week by week, others deals will be posted as soon as Jumia released them. If you are looking for your first a nice laptop or you want to replace your existing smartphone, based on the above calendar, I believed you should know the better day to grab your items with prices slashed.

Be expecting amazing discounts on dozens of products, across all Jumia Stores. As usual, the deals will not be permanent. Every hour between 12.00AM to 11:59PM on Black Friday Festival, 13th of November till 13th of December, Jumia will be uploading a couple of mouthwatering deals to the store so that consumers can grab them as fast as possible. Flash Sales several times a day. It's all about how fast you can secure each deal before it goes out of stock.


Get your fingers and debit card ready for 2017 Jumia Black Friday Festival, which is billed to be the biggest shopping event of the year.

Stay tuned for more info on the matter and see you all on November 13th at midnight!
Posted by Shelaf
Labels: Jumia
at 12:02 PM