A+ A-
Print Email
Many Nigerians are ready for TStv decoders and some neighboring countries are also ready to come to Nigeria and buy the decoders and go back to their respective countries, but up till this moment there is no single update on when the product will be out for sale.

You guys should note: at times, launching of a product doesn't mean the product will be out the following day. Flash from the past, Nokia launched the Nokia 3, 5, and 6 I guess in march this year, but the phones were released into the Nigeria market in August and July in Europe. As regards the test transmission, a comment posted on their official Facebook page by one of their fans: Princess Debby confirmed that; "Tstv is now available and active on ABS satellite position with more interesting channels.....just their testing channels and you can now watch some movies on there testing channels with strong decoder.
12529/V/36000, from 60cm upward..... currently 37 channels".


An update about the Sport Channels, most especially the Bein sports.
Some people composed a letter on-behalf of beIN to TStv for intellectual property infringement. This is the letter below; Zoom the image or read the content directly. 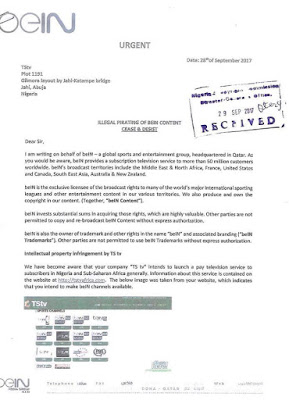 Dear Sir,
I am writing on behalf of beIN - a global sports and entertainment group, headquartered in Qatar. As you would be aware, beIN provides a subscription television service to more than 50 million customers worldwide. beIN's broadcast territories include the middle East & North Africa, France, united States and Canada, South East Asia, Australia & New Zealand.

beIN is the exclusive license of the broadcast rights to many of the world's major international sporting leagues and other entertainment content in our various territories. We also produce and own the copyright in our content. (Together, "beIN Content")

beIN invests substantial sums in acquiring those rights, which are highly valuable. Other parties are not permitted to copy and re-broadcast beIN Content without express authorization.

beIN is also the owner of trademark and other rights in the name "beIN" and associated branding ("beIN Trademarks"). Other parties are not permitted to use beIN Trademarks without express authorization.

Intellectual Property Infringement by TStv
We have become aware that your company TStv intends to launch a pay television service to subscribers in Nigeria and Sub-Saharan Africa generally. Information about this service is contained on the website at http://tstvafrica.com.

The below image was taken from your website, which indicates that you intend to make beIN channels available.

On the other hand, TStv has issued a disclaimer against the documents, below is their reply;


DISCLAIMER!!
We are not unaware of the messages circulating the social media regarding letters from Bein Sports and Turner respectively. We wish to inform Nigerians once again that the letters being circulated are FAKE. They were designed primarily to bias Nigerians. Kindly disregard the said frivolous letters.
TStv Africa...connecting your world!

As I earlier said in one of my previous post, TStv have bein sports on their list of sports channels on the website, but during the launching, TStv CEO did not say anything of sports airing. In fact, he didn't mention a single sport channel among the list of their channels. Therefore, don't raise your hope too high.

But, with the following interesting features that can't be found elsewhere...
*Over 200 channels
*WiFi Router Capability
*Free 20GB data bundle
*PVR option
*In-built Camera for video calling
*Video conferencing
*Movie Box
*Affordable subscription
*...and 50GB storage space.
TStv is still worth going for. Let hope and believe they will do as promised, TSTV ALL THE WAY.
Posted by Shelaf
Labels: Satellite TV
at 4:57 PM