A+ A-
Print Email
The wait is over! FIFA 18 is here and thus begins a new chapter in the FIFA tournament series! It is time to show who is the boss! 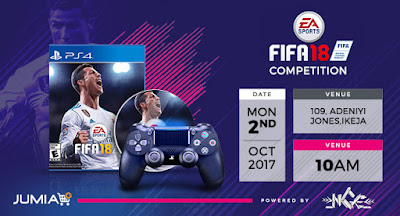 Interested in joining the FIFA 18 competition for a chance to win N190,000 and a FIFA 18 CD? Hurry now, Fill the form below.

To get yours, click on "Pre-Order Now" button below.


Entered For The FIFA 18 Competition? Read Terms and Conditions
The tournament will cap out at 48 entrants.
The entrants would be divided into 12 groups of 4, with only ONE person proceeding from each group, which leaves a total of 12 winners in the SECOND round.
Following that, the BEST FOUR losers will  be selected  to complete the table of SIXTEEN players who will play in the ELIMINATION / KNOCK OUT STAGE of the tournament. Only FOUR players will proceed from this stage.
From these four players the Winners of the Prizes will emerge.

General Rules
1. Obey the judges at any given point in time and any complaints should be reported to them. If you feel that you have been unfairly treated, notify the Grand Umpire. DO NOT TAKE ANY CORRECTIONAL ACTIONS ON YOUR OWN.
2. No coaching allowed during gameplay.
3. Please ENSURE THAT AFTER YOUR GROUPING, YOU ARE AVAILABLE FOR YOUR GAME AS ABSENTEEISM WOULD LEAD TO A WALK OVER.
**Absenteeism is determined if your opponent is seated and ready to play and you are unavailable 5mins later.**
4. In the pools/group stages, if a contestant has played any of his/her matches, and then decides to forfeit his/her remaining match(es), HE/SHE WOULD AUTOMATICALLY FORFEIT ANY PREVIOUS WINS HE/SHE HAS.
**A forfeit leads to a 2-0 win by the opponent.**
5. Players should remain in their seats immediately after their matches and report their scores before getting up.
6. Spectators should conduct themselves and not distract the players. Flaunting this rule would lead to the person being sent out of the venue.

Tournament Format/Game Rules
1. Players would be separated into groups of 4 (minimum) and play each other in a round robin format to accumulate points (3 for win, 1 for draw, 0 for loss). THE TOP 2 PLAYERS (players with the highest points) WOULD ADVANCE TO THE NEXT STAGE. Depending on the number of groups available, the best losers may be selected to complete the elimination stage participants.

4. Other rules:
– Players have 2minutes to set their formations and tactics before the start of the match.
– Players can pause ONLY ONCE  during gameplay stoppage eg offside, throwing etc. to make formation changes. NO PLAYER SHOULD PAUSE DURING ACTIVE PLAY.
– Additionally, players can change formation one more time during gameplay breaks ONLY IF THEIR PLAYER IS INJURED OR GIVEN A RED CARD.

6. All elimination stage matches up to quarter-finals,  that end in a draw would be decided by a penalty shout-out.

7. Quarter-finals to grand finals matches that end in a draw  would progress to extra time with the GOLDEN GOAL RULE. If there is still no goal, it moves on to penalties.