A+ A-
Print Email
Mozilla has released the Firefox 57 beta, a completely overhauled browser that will be called Firefox Quantum when it launches in stable form on November 14th, 2017.

"Since the version number 57 can't really convey the magnitude of the changes we've made, and how much faster this new Firefox is, we're calling this upcoming release Firefox Quantum," Mozilla explained in a post announcing the Firefox 57 beta. 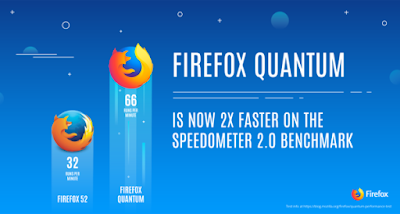 Firefox Quantum spearheads Mozilla's effort to win back users lost to Chrome since Google released it in 2008, and revive its position as a formidable rival in the browser wars as it once was against Internet Explorer in the 2000s.

Firefox's share on the desktop has declined from 30 percent in 2010 to less than 14 percent today, while on mobile it has just five percent, according to StatCounter.

The next release is the culmination of work under Project Quantum, a major effort to deliver a new Firefox browser engine that exploits multi-core CPUs and GPUs on today's desktop and mobile hardware for a faster and smoother browsing experience.

The users of Firefox 56 could open over 1,000 tabs in a few seconds thanks to another projected called Quantum Flow. Mozilla boasts that Firefox Quantum is twice as fast at loading popular websites as it was a year ago and claims on its own tests of the beta that it beats Chrome to many websites, including the Google login page.

Ahead of Firefox Quantum's release, Mozilla's developers have removed 468 bugs that may have impeded the browser's new speed capabilities. Part of the Quantum improvements come from a new "super-fast CSS engine" that was written in Rust and, unique to browsers, runs in parallel across multiple CPU cores.

In other changes, Firefox now prioritizes active tabs so that these download and run before other tabs that are open in the background.

Finally, Firefox Quantum will introduce a new modern interface called Photon, which Mozilla says is better suited to today's high DPI displays. On Windows PCs with a touch display, menu sizes adjust to suit a mouse or finger. It also introduces a new look to menus, square tabs, a Library button that is a home for bookmarks, downloads, history, saved Pocket articles, and so forth.

Mozilla argues that the new browser will feel natural on both touch- and mouse-based systems, including Windows 10, macOS High Sierra, Android Oreo, and iOS 11.