400GB microSD Card is Now Available on The Market From SanDish

A+ A-
Print Email
At the IFA 2017 conference this week, Western Digital unveiled its first SanDisk Ultra microSDXC UHS-I card with 400 GB capacity. This just happens to be the largest-capacity microSD card available on the market, and it comes at a very sacrificial price. 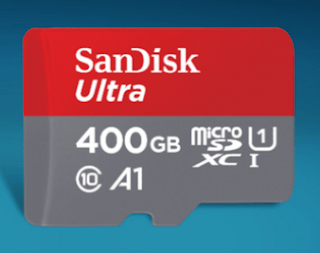 The new 400GB card comes two years after the company introduced its 200GB SanDisk Ultra microSD card, with the new version doubling the storage capacity. According to WD, over 150 billion apps are expected to be installed in 2017, and with the new microSD, users will be able to transfer files up to 100MB/s speed and goes as SDXC UHS-I class of a card. It is rated as App Performance Class A1, a rating that signifies that the card can run apps as well. Designed for use in Android smartphones, drones, cameras, and other devices that use microSD storage.

The company also introduced the SanDisk iXpand Base for iPhones that enable Apple users to automatically back up files and photos on the charger/portable hard drive.

The newly introduced 400GB Micro SDcard comes with 10yrs warranty and it will be available from SanDisk and other major retailers soon. It is priced at $249.99.

Have a wonderful Eid-el-Kabir celebration and a remarkable September filled with love and laughter!
Posted by Shelaf
Labels: mobile
at 9:21 PM