A+ A-
Print Email
Infinixmobility is at it again, and as usual, they are coming out with another elegant smartphone. Right now, infinix is jumping straight to 6GB Ram! The device is put in an appearance with a model number of X603 and it’s scheduled to be launched next week. 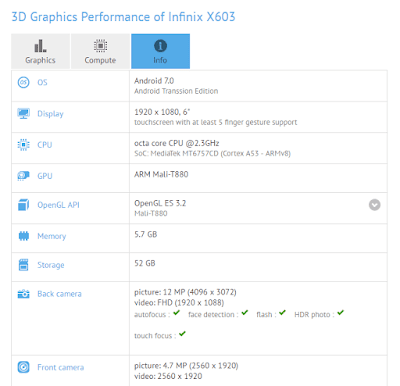 The device according to the benchmarking tool boasts of huge 6GB of RAM and 64GB of storage. Our guess is, this might turn out to be the Infinix Zero 5 or Zero 5 Plus.

Though the real name of the smartphone wasn't specified yet, we have a clue here; since the current Infinix Zero 4 Plus has a model number of X602, an indication that the listed infinix phone belongs to the Zero series. It suggests that this yet-to-be announced device could be Infinix Zero 5 or Zero 5 Plus.

The Infinix X603 also boasts a 6-inch screen having a Full HD display and 1920 by 1080 pixels resolution. It is powered by Android 7.0 Nougat with an overlay of XOS Chameleon-Infinix’s custom UI and 4500mAh battery.

According to GFXbench, the device features 12-megapixel sensor with autofocus and face detection support together with a Dual LED flash. While at the front there is a 5MP selfie snapper with 2k Video recording.

If the information on  GFXBench turns out to be true, the Infinix X603 will no doubt compete with the high-end devices this year.

What do you guys think of the Specification details of the Infinix X603?
Posted by Shelaf
Labels: Specs & Reviews
at 1:55 PM