A+ A-
Print Email
The producer of iPhone 5, iPhone 5c and iPad 4 version –Apple, has confirmed that the users of the particular brand will be in trouble soon following planned introduction of a new operating system which would render the named phones useless. 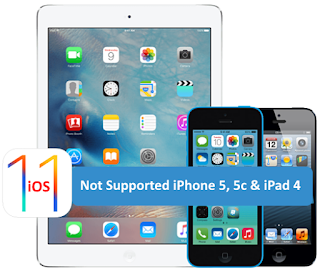 Recall the latest Apple OS is on the way and it's called iOS 11. While it's a good news for majority of Apple fans, it will be a heartbreak for users of old iOS devices.

According to Apple, iOS 11 will make iPhone 5, 5c and iPad 4 obsolete in terms of Apple ecosystem.
The software update (iOS 11) will run only on devices with a 64-bit processor, meaning it won’t be compatible with the guts of the iPhone 5 or iPhone 5c and iPad 4 that feature 32 bit processors.

However, the phone will still work, but users won’t be able to download the latest apps or security upgrades to protect against hackers and vulnerabilities. In other words, if you are still using and loving your iPhone 5, iPhone 5c or iPad 4 generation, it is time to ditch it out to your younger one or exchange it for a brand new iPhone 6 or 7.

This is a heartsick news to Apple device users with 32 bit processors, but in the world of technology, upgrading is essential.
Posted by Shelaf
Labels: iOS
at 12:29 PM