A+ A-
Print Email
Infinix S2 (The world first Wefie device) was officially launched in the Kenyan market about 2 weeks back. S2 X522 was just available in Nigeria 3 days back, featured in the ongoing Jumia Mobile Week, the device came with Android 6.0 Marshmallow OS version. Good news for those that have grabbed the Dual Front Cameras device (Infinix S2), Infinixmobility has started pushing latest Android 7.0 Nougat Update to your new device. 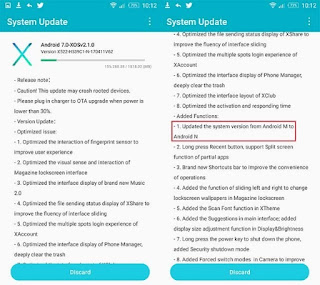 The update packs a lot of changes and enhancements. Android Nougat brings a lot of neat improvements to Android, including split screen multitasking, battery improvements with Doze on the go and improved notifications management.

This update will reinforce the following:

If you are an S2 user, you should get the update notification via OTA. The new software update is available via OTA (Over The Air), and it weighs in at around 1.8GB in size. You probably need to connect to a fast Wi-Fi network or subscribe for at least a 2GB data plan for the download and also charge your battery to at least 80% before proceeding with the software update.

Once the above requirements are met, go ahead with the below procedures.
Relax and wait for the new update to fully install. After successful installation, your phone will be rebooted and Android 7.0 Nougat will smile to you on the device! Take note that the first booting process might take a few minutes to complete.

You can check the Infinix S2 full specification here. If the lack of Nougat was holding you back from buying the Infinix S2 Pro before, your concern has been taken care of. Go get yours. Nougat should be a tasty treat. It is available in Jumia Nigeria Store with the price of N60,999 => Grab it Here.
Posted by Shelaf
Labels: Android
at 9:55 AM