Sell Your Payoneer Dollars At The Profitable Rate In Naira

A+ A-
Print Email
Hello guys!... If you use Payoneer, then you probably know what I'm about to rant about Nigerian ATM machines and Payoneer dollars being withdrawn for Naira.

About a year ago, when I started earning huge dollars to my Payoneer account, I saw myself as the new millionaire in town considering the amount of Payoneer dollars I rake in every month. But sadly on getting to the bank ATM machines around me to withdraw, I was deeply disappointed with what the machines dispensed in the name of Payoneer dollars to Naira rate. 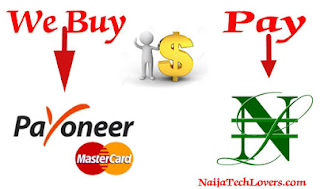 The amount of dollars in my Payoneer account, using the rate of dollars to Naira in the parallel market at the time clearly stated that I was a millionaire. But the ATM rates said otherwise. Because, the amount of money they took from my account per dollar & per withdrawal clearly puts me back to being a thousandaire.

Imagine getting paid with N267/$ for your hard earned Payoneer dollars when the dollar is currently N485/$ at the parallel market? That's a whooping N218 being stolen by the banks from every piece of dollars you might have earned. I don't blame people for choosing MMM over them.

For instance, if you earned $1,000 Payoneer dollars, that's 1000 x 218 = N218,000 being stolen from you. As if that is not enough, they bill you $3.2 per ATM withdrawal and an additional $1 for checking your Payoneer account balance with the ATM machine after withdrawal.

You may have experienced all of this out of ignorance, but its time you stopped and sell your Payoneer dollars at the profitable rate in Naira.

We buy/exchange your Payoneer dollars for you at the best rates ever and then use it to help those who may need it for online transactions. So you can sell to us and smile to the bank.

Why You Should Sell/Exchange With Us?
==>1. Trusted! We've lasted more than you can think of.
==>2. We buy as much as, as well as, as low as you can provide
==>3. We give you the best rate for your hard earned money
==>4. Fast response! We reply instantly on Whatsapp and Telegram
==>5. Fast Payment! After receiving, confirming your fund, we credit your Nigerian bank account of choice with the Naira equivalent instantly (no time!)
==>6. The rate is dependent on the volume of Payoneer dollars you have for sale. That is, the higher the volume, the sweeter the rate you will get
==>7. Apart from Payoneer dollars, we buy skrill at a very good rate and then buy& sell Bitcoin as well.
==>8. If the “Pay/Make A Payment” features has been removed from your Payoneer account, making it impossible to transfer funds, but rely on ATM for withdrawals at an awkward rate. We can still help you. Just hit us.

How To Contact Us?
Chat up on Whatsapp with 07030602334
Telegram: @uchefrancis
Blog: TechDavids.com
Posted by Shelaf
Labels: Sponsored
at 1:00 PM