A+ A-
Print Email
Google has just made mirroring on Android via Chromecast an official feature. The announcement was first made at Google I/O during last month June, and is now a reality.
Chromecast makes it easy for you to enjoy your favorite entertainment on the biggest screen in the house. Now, you can mirror your Android phone and tablet to the TV to see your favorite videos, music, apps, photos or anything else, exactly as you see it on your mobile device — only bigger.
As is often the case with Google and new features, mirroring is naturally in beta and only supported by a shortlist of devices. Currently, the list includes older and newer devices, with an odd omission of HTC's One (M8). Here's the full list:
Google has also promised support for more devices in the future.

To start mirroring, simply select “Cast Screen” from the navigation drawer in the Chromecast app and select your Chromecast device.  On Nexus devices, this feature is also available through the quick settings menu. 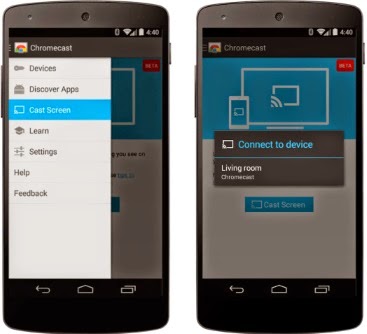 Now, anything on your Android device will appear on the TV. You can share photos stored on your phone with a group of friends, or scope out the scenery for your next family vacation together on the big screen using Google Earth. 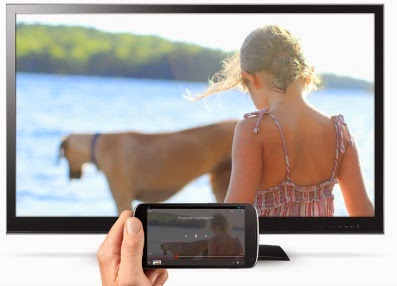 If you’re using a Nexus device you’ll see a ‘Cast Screen’ option in the Quick Settings shade. If you’re not just dive on into the navigation drawer in the Chromecast app and tap the ‘Cast Screen’ entry. 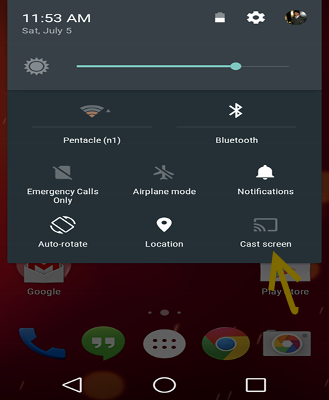 After tapping to connect you’ll be prompted to choose a Cast device on your network. Select the appropriate one and, after a few seconds, your phone or tablet will appear on your TV.
For optimum cast experience you should put your device into landscape mode.
To end a cast session just repeat the steps above. This time you’ll be presented with a disconnect option.

Device not supported? Try this

If your device isn’t on the officially supported list all is not lost. An awesome XDA Developer has put together an experimental app called ‘Mirror Enabler’ that allows rooted devices to join the fun using the official Chromecast app.
The hack won’t work on every device, but a large swathe of popular devices are reportedly working fine with it, including the 1st generation Nexus 7, Sony Xperia Z2 and ZL, and the Motorola Moto X.

Feel free to drop your comment and remember to Click Share/Like buttons for the benefit of others.
Posted by Shelaf
Labels: Android
at 11:24 PM